My son-in-law, Mike, is participating in The Flying Pig Marathon in Cincinnati on Sunday. He'll be running 26.2 miles in about 3 1/2 hrs. Whew! I am just tired thinking about it. My husband, daughter, grandchildren and I will cheer him on along various points of the course.  Actually, it is a lot of fun.

Back in November, my daughter was cleaning out some closets and found quite a few of his running bibs from previous races. She suggested that it would be nice to make a "Bib Book" I thought this was a great idea and wanted to do it as a Christmas Gift.  However, short on time, the book  never materialized.  My daughter suggested that it be given to him after he completes the Flying Pig Marathon.
She picked nine bibs and made them into this book.  Here's the cover. 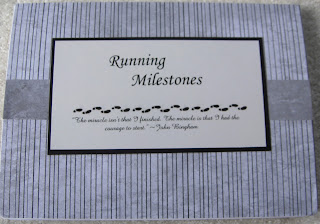 My daughter came up with the title. I found the quotation. I tried to add a shilouette of the runner to the right of the words, but had so much difficulty lining up the words & footprints; so I scrapped the idea after fooling around for 20 minutes. 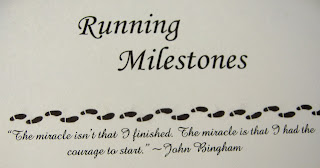 This first bib dates back to 1992 when my son-in-law was a sophomore at Turpin High School. This was the bib for districts. Unfortunately, he was an alternate so he didn't run in that race. Qualifying as an alternate was very meaningful to him though. 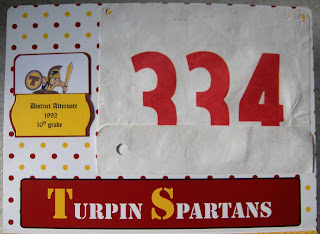 The next bib is from a 5K sponsored by a neighboring town. My son-in-law tries to run in it every August as he gets to see many former classmates and old friends. 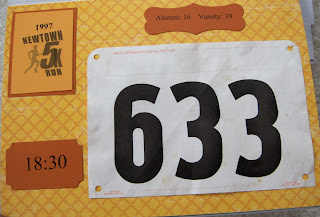 Every May Cincinnati has a marathon.  It is called The Flying Pig.  Cincinnati was once known as Porkopolis because of its long history as a pork processing center. Thus the name Flying Pig.  The inaugural race was in 1999. 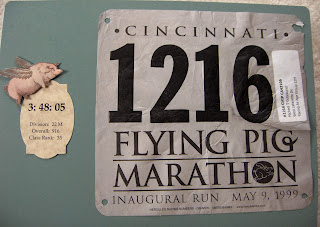 Mike really improved his time in a year. 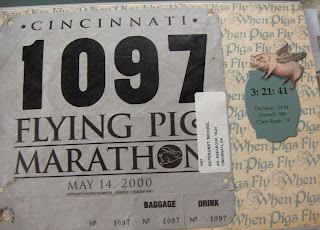 One of his many generic bibs from numerous races. 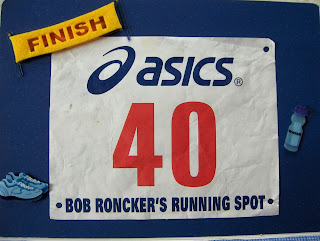 This one is from the Columbus Marathon in 2006. 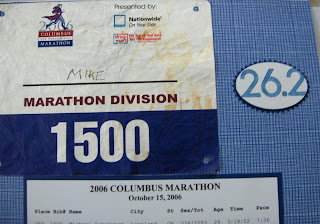 The next two bibs are from a 10 K race that Cincinnati sponsors every Thanksgiving. Mike has been running in it along with his brothers for years. This might actually be the first time he ran in this race as he was a junior in '93. 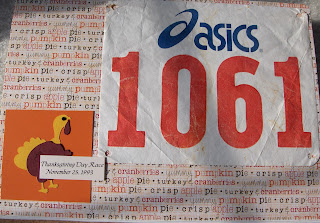 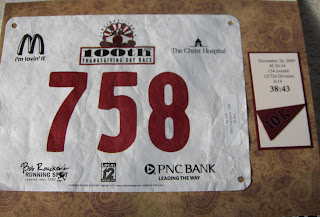 My son-in-law coaches the Cross Country Team at the high school where he teaches.  Every year he has 1-3 boys qualify for state.  For the first time last year, coaches were given bibs. My daughter thought it would be nice to add this one to the collection. 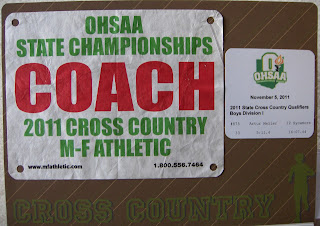 This page was intentionally left blank as I will add the bib and data from the race he runs Sunday. 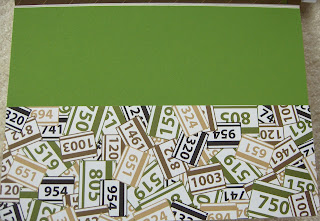 I can't wait to give this to him. I know he is going to love it.Thank you for looking.

Carol, that is very clever! Also, it's a wonderful and thoughtful gift for your running SIL!

This is a great way to organize lots of memories for your son-in-law. I'm sure it will mean a lot to him. Love the little 'flying' pig image on a few of the pages - it's the perfect accent!

You have a very active and healthy SIL. That is so inspiring. I think it is wonderful that you are so supportive of him, and I know he will appreciate this book so much. It's such a great idea.

What a fabulous idea...I'll bet he will just love it and appreciate all of the time you put into making it. It really looks great!

What a great project, Carol! This is so precious and they sure will appreciate it. Gteat job! 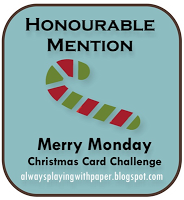